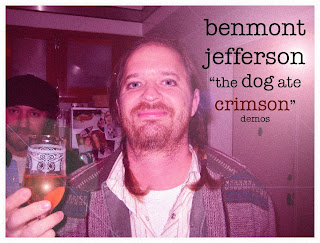 She sees a shiny thing just within reach...and she goes.

There then a mighty upheaval. A terrible jerking asunder. The world come down. An endless moving of lips with no real sound coming out save sucking.

We were going to go in there and play "Good Friend, Bad Friend". A poor plan well executed.

But that I could remember the look on everybody's face.

"You are in the Liars Club. Just not the local chapter. Not yet, Ambassador. But keep making the rounds, keep making all the dinners and all the parties. Keep writing your own press."

There was trouble all along Blackberry County Line. The Dog Ate Crimson was recorded during a confusing time period, to eight-track recorder. An apartment somewhere. A room that was all couch, the windows blacked out. Lafe plays lead guitar, Dollar plays everything else. We were going to call ourselves Glass-Eyed Mariner but it didn't work out, and I'm not entirely sure as to why. We were supposed to get this stuff into Melcher's hands. No luck no nada.

That was everything going away all the time, as if pulled from the body's visceral core by a gravity outward.

The tracks
1) Both He and Vivien Suffered from Disordered Nerves
2) Cold Blowy Southern Californ
3) Ozark Faultline
4) Cash Jobs Cutting Things
5) Me and My Class Issues and I
6) Erosion's Landfill
7) First Step Outside the Acropolis
8) The Habbit (Parts One, Two, and Three)
9) The Damp Mask
at 5:45 PM